The defense will take place the 7th december at 14:30  at the "Grand salon", UFR SLHS, 32 rue Megevand in Besancon. 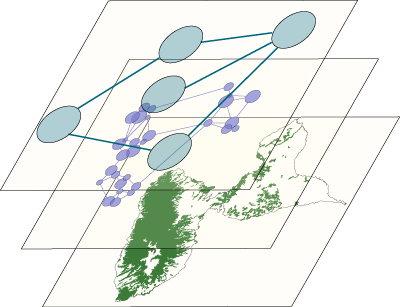 Several key ecological processes for maintaining biodiversity rely upon the ecological connectivity of habitat. Accordingly, connectivity modelling methods have been developed for understanding precisely the influence of connectivity and deriving sound biodiversity conservation measures. Among them, landscape graphs represent habitat networks as sets of habitat patches (nodes) connected by potential dispersal paths (links). Yet, the ecological relevance of these tools required validation from biological data reflecting closely the influence of habitat connectivity. Genetic data allow for such validation as population genetic structure partly depends on dispersal-driven gene flow between habitat patches. Genetic structure can also be modelled as a genetic graph whose nodes correspond to populations while its links are weighted by pairwise genetic differentiation measures.

The objective of this PhD project was to bridge landscape and genetic graphs in order to (i) assess the ecological relevance of landscape graphs and (ii) gain knowledge regarding the relationship between habitat connectivity and population genetic structure. After identifying genetic graph construction and analysis methods fitting several research contexts and developing a software package for the joint use of both landscape and genetic graphs, we compared them in two empirical studies. We thereby (i) assessed the respective influence of several components of the habitat connectivity pattern on both genetic diversity and differentiation and (ii) validated the ecological relevance of landscape graphs. We then evidenced that integrating variables deriving from the nodes and links of both types of graphs could improve the inference of the effect of every landscape feature on connectivity. The methods we have developed could find new applications in this field and others. We hope that the results of this thesis will contribute to this.

You will also be able to attend the defense by videoconference :